My last post argued that Antarctic Ice Cores are poor proxies for world climate.  They do not show short term changes.  Changes take centuries to develop in ice cores.  Sudden changes that last for a few years or even hundreds of years can be completely missed by ice cores.   Things like…say…a sudden spike in carbon dioxide levels following a volcanic eruption.

Lake Toba is a large lake in Indonesia.  The lake is 100 kilometers long and 30 kilometers wide.  About 74,000 years ago it was the center of a super volcano eruption.  The caldera of this much studied volcanic event encompassed the entire lake and surrounding territory…

Scientists measure volcanic eruptions using the Volcanic Explosivity Index or VEI.   The total volume of material expectorated by the volcano is estimated.  Small volcanic eruptions are VEI1, super volcanoes are VEI8.  The following chart helps me get a sense of the size of the various events. 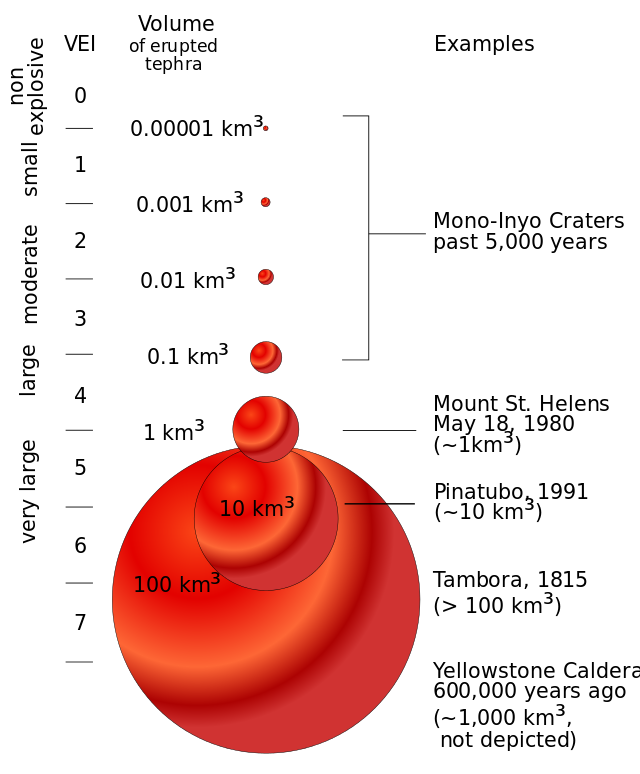 I like this chart because it includes the 3 most recent events I like to use to get perspective, Mt. St. Helens, Pinatubo and Tambora.   The St. Helens explosive eruption of 1980 was a relatively small event.  Yep a small event.  Pinatubo was about 10 times larger and it was big enough to change temperatures worldwide for 2 years. Tambora is the most recent VEI7 event and was some 10 times larger than Pinatubo.  Tambora began erupting on April 5, 1815.  The eruption could be heard over a 1000 miles away.   1816 was nicknamed the year without a summer.

Tambora was a big deal.  The biggest in recent history. Toba was a VEI8 event some 28 times bigger than Tambora.

Imagine if you can what that must have been like.  It was so cold and so dark that that man almost didn’t survive the event. NOW let’s take a peek at the Vostok Antarctic Ice Core.   I have selected a graph that blows up the period from 50,000 years ago  to 100,000 years ago.

I see a very small dip some 74,000 years ago.  A dip of perhaps half a  degree C with virtually no change in carbon dioxide levels.  Carbon dioxide levels spiked during the eruption, particulate matter would have stayed in the atmosphere for centuries.  Temperatures all over the world would have dropped dramatically.  Temperatures are supposed to have dropped 3 to 5 degrees C and the event is supposed to have changed global climate for 1000 years.

The chart is full of bigger moves.  Bigger than a VEI8 event?  What natural event could that be?  About 4000 years before the event there is a sudden fall of about 3 degrees C in a very short period of time.  I wonder what caused that?

When I look at ice cores and think about super volcanic events I feel better about the world.   If the world can survive a Toba event and recover…maybe the gloom and doom being spouted at UN climate meetings is a bit overdone?

Any discussion of climate change begins and ends with a discussion of temperature.  A Bloomberg article titled Holding Back Climate Change Isn’t as Hard as You Think is a typical example.  Apparently the International Energy Agency has looked at recent trends in energy use and is encouraged.  The third paragraph states the following:

Pledges already put forward for the Paris conference, including by the U.S., European Union and China, could hold temperature increases to 2.6 degrees Celsius. That’s significantly less of an overshoot than the 3.6-degree long-term gain in the IEA’s main scenario issued in November. The United Nations is trying to hold the increase to 2 degrees Celsius (3.6 degrees Fahrenheit) by 2100.

The article goes on to say that countries all over the world are becoming more energy efficient and are replacing coal fired power production with natural gas.

The article is a refreshing change from the gloom and doom normally spouted…but it makes the exact same group of mistakes most articles on climate make.

How can anyone guarantee any specific temperature in such a dynamic system?

Climate experts do not make specific climate recommendations.  They make predictions using probabilities from computer models.   These models are not precise.  They routinely have a range of values as figure 3.2 from the 2007 UN report demonstrates.

The UN is not trying to keep temperatures to a 2 degrees C rise, they are trying to keep the rise from current levels to less than a degree.   The article simply quotes the UN stated goal incorrectly.   The UN stated goal is to keep temperature from rising by more than 2 degrees C since the beginning of the Industrial Revolution.  The Industrial Revolution began as the Little Ice Age was ending.  It was a particularly cool period of recent history.

The UN chose to start their calculating at this opportune time and nobody seems to care that the premier world climate agency is cherry picking data.  The UN has often stated that most warming before 1950 was natural climate variation. Why add more than 1 degree C of natural climate variation to the total?  It seems an odd convolution of the arithmetic.

Why the UN’s Intergovernmental Panel on Climate Change (IPCC) has made such a prediction is anybodies guess.  In a world where a volcanic eruption can cause a 2 degree C shift in a single year,  the IPCC’s goal of 2 degrees C since the Industrial Revolution has always been unrealistic and unattainable.

Accurately calculating the correct historical temperature is very difficult.  Satellite data only exists for 35 years.  Data on the Oceans is spotty and new with the best data beginning in the 1990’s.  We have only a single data point for all of Antarctica.

Direct data in any form is only 200 years old and the best data has been gathered since the 1990’s.  As predictions go back in time the data gets more and more approximate.  We have general ideas about what the climate was like 10,000 years ago (similar to today), 20,000 years ago (much colder than today — think ice sheets in New York City) or 130,000 years ago when we think it was quite a bit warmer than it is right now.  That information is much less precise than the mass of data being produced every day in the 21st century.

The approximate nature of old data makes small changes over short periods of time difficult to calculate or predict.

Data over 200 years old is indirect data using tree rings, soil bores and ice cores and other indirect and anecdotal evidence.  This indirect data is both regional and has a small sample size which means it is difficult to make precise predictions about the climate of just a few thousand years ago.

Ice cores provide long term data for a single specific location in the coldest place on earth.   Trying to predict climate in New York City some 500,000 years ago based on a the temperature in a single ice core in Antarctica is much less accurate than reading a thermometer.

Regional climate varies wildly and is not a good proxy for worldwide climate.  Most anecdotal evidence is made up of proxies for regional climates.  Small changes to the world climate ecosystem in years gone by will almost certainly be missed.  It is difficult to tell how important today variations are, given the poor historical data sets.  Maybe the climate we are seeing is extraordinary, maybe it’s all happened before?

And the data interpretation keeps changing!

Just a few days ago NOAA announced that they had found errors in recent temperature calculations that help explain the less warm than predicted climate these last 15 years.  Other climate groups are less sure, choosing to take a wait an see attitude. Perhaps they remember other climate missteps (Climate-gate or the Mann Hockey Stick Graph).

Just about every article using temperature data ignores the limitations the science faces.  Specific numbers are used in a world full of approximations and guesses.

And so it goes